Bruce R. Cohen was appointed as a Superior Court Judge to the Maricopa County Superior Court in May, 2005.  He was assigned to the Family Court Department for six years, where he served for four years as Associate Presiding Family Court Judge.  This was followed by a four year assignment to the Criminal Department of the Court, where he served for two years as the Managing Judge of the Post-Conviction Relief Unit for the Criminal Department.  He then spent three years assigned to the Juvenile Court and one year on a Civil Court calendar.  He now serves as Presiding Judge of the Family Department of the Maricopa County Superior Court.

In the mid to late 1970s and before entering the legal profession, Judge Cohen worked in the concert industry.  He produced shows with many top acts, including Bruce Springsteen, The Eagles, Bob Seger, George Carlin, Bob Hope, Journey, Billy Joel, Yes, Black Sabbath (with Ozzy), Kenny Loggins, Cheech and Chong, and the Rolling Stones.  He helped produce a benefit concert in 1977 with Fleetwood Mac, which raised over $400,000 for the American Heart Association.  He was given an outstanding service award in 1977 by the Heart Association for those efforts.

After graduating from the University of Arizona in 1978, Judge Cohen attended law school at Arizona State University.  Since graduation in 1981, he has remained involved with the Sandra Day O’Connor College of Law at Arizona State University. In 2001, he served as a family law adjunct professor at the College of Law and has been a guest speaker on many occasions since that time.  He and his sponsored an annual scholarship project through 2012 for first year law students on the issue of professionalism.  Further, Judge Cohen was a participating member of the National Forum on the Future of Legal Education held in April, 2010.  In the summer of 2010, he helped develop a mentor program for first year law students to be paired with judicial officers.

Prior to his appointment to the Bench, Judge Cohen was in private practice for 24 years.  He was a certified specialist in Family Law and served on the Family Law Board of Legal Specialization for the State Bar of Arizona.  He also served a term on the Family Law Executive Council for the State Bar of Arizona. He was a Fellow in the American Academy of Matrimonial Lawyers and was named annually to the Martindale Hubbell Preeminent Lawyers in America.

Judge Cohen served on the Arizona Supreme Court appointed Child Support Guidelines Committee for four quadrennial reviews, commencing in 1996, and served as Chairperson for that committee for the 2008-2010 Review.  He also served on the Arizona Supreme Court appointed Family Law Rules Review Committee and on the Arizona Supreme Court Admission on Motion Task Force.  Judge Cohen is a past president of the Arizona Association of Family and Conciliation Courts and completed a three year service as a Member of the AzAFCC Board through January, 2011.  He served as Chairperson for the 2010-11 AzAFCC Summit Project, which focused on developing communication skills for parents engaged in high-conflict divorce.   He is past board member on the Judicial Executive Council for the Maricopa County Superior Court and  served as the Chairperson for the Judicial Appointments Advisory Board for the City of Scottsdale until January, 2018.  He is currently a member of the Supreme Court’s Committee on the Impact of Domestic Violence and the Courts.

Judge Cohen co-authored legislation on parent education programs and adoption of special needs children. He was named Volunteer Lawyer of the Year in 1990 by the Maricopa County Bar Association.  The Arizona Family Support Council named him the 2010 Judicial Officer of the Year for the State of Arizona.  Additionally, he received the 2011 AzAFCC Outstanding Service Award.  At the State of Arizona Annual Judicial Conference held in June, 2011, the Arizona Supreme Court named him as the recipient of the prestigious “Improving Public Trust and Confidence in the Arizona Court System” Award.  He was also the 2013 recipient of the Maricopa County Superior Court Pendleton Gaines Collegiality Award.  He was a nominee for the US Justice Department 2014 National Crime Victims’ Service Award.  Judge Cohen is a founding member of the Maricopa County Superior Court peer support program.  While serving as the managing judge for the Criminal Department Rule 32 Unit, the National Association of Counties awarded the Unit with its 2015 National Achievement Award for innovation.  He is a 2016 recipient of a “Lifetime Achievement Award” from the State Bar of Arizona- Family Law Section.

Outside of his involvement with the legal community, Judge Cohen worked in collaboration with others in 2013 to return to Arizona the program known as “Anytown.”  The organization brings together high school aged young men and women for a weeklong camp focused on stamping out bias, prejudice and bigotry and celebrating diversity.  He served as a co-director for camps held in 2014 and 2016. 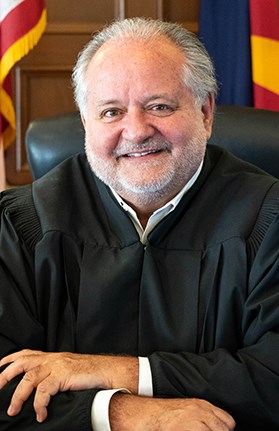