Judge Sara J. Agne was appointed to the Maricopa County Superior Court by Governor Ducey on December 13, 2017, and took the bench in early 2018. Judge Agne serves as the Arizona Tax Court Presiding Judge, and has a calendar that includes Commercial Court cases, while generally presiding over cases for the Civil Department of the Court. After graduation from the University of Michigan Law School in 2008, Judge Agne was a lawyer with Snell & Wilmer L.L.P., first as an Associate and then as a Partner in its Special Litigation and Compliance Group. Judge Agne co-chairs the Arizona Supreme Court’s Advisory Committee on the Rules of Evidence and has served for nine years on the State Bar of Arizona Civil Practice and Procedure Committee. The judge is a veteran petitioner of several court rules cycles for a variety of rule sets and chaired the Ariz. R. Civ. P. 5.4 Working Group in 2018 and 2019.

Judge Agne also chaired the Task Force on Conducting Juvenile Court Proceedings Safely in a Community Experiencing the Spread of an Infectious Disease, and in early 2021, the judge was named a “Presiding Judge’s COVID Hero” for that work. A former journalist, Judge Agne earned a B.A. in Journalism from Arizona State University, serving as Editor in Chief of the University’s morning daily, The State Press, during her senior year of college. 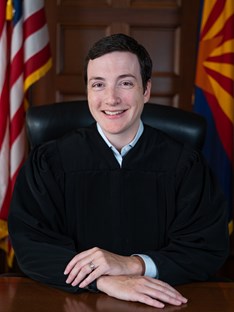